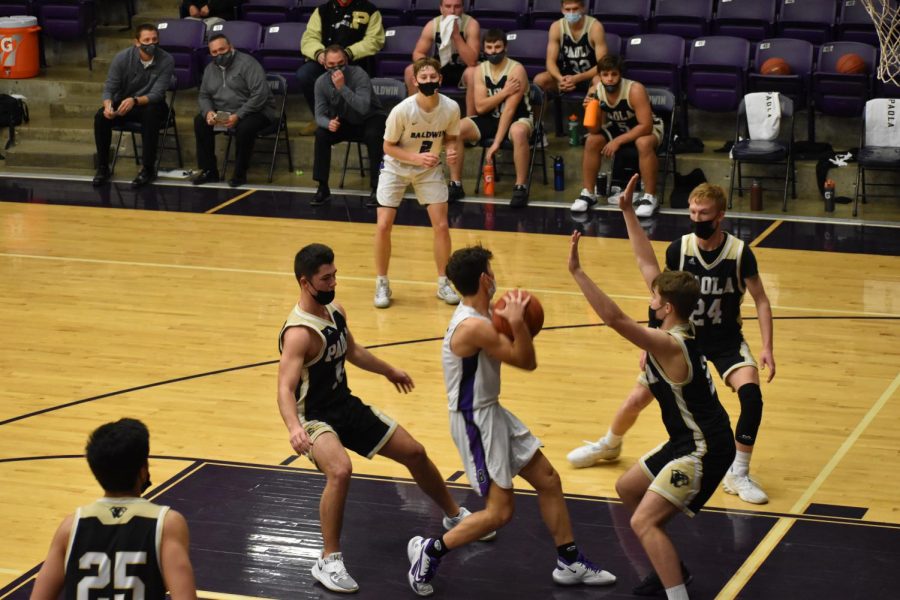 The winter sports season looks quite different for bulldog athletes. Competitors are required to wear masks unless told otherwise. Both wrestlers and basketball players have to overcome the struggles of competing in face masks. The KSHSAA Executive Board passed rules to allow meets to be smaller to hopefully reduce COVID-19 risks.

One of those rules includes fan limitations: each wrestler is allowed 2 family members to attend a meet unless told otherwise.

“I think overall, the KSHSAA guidelines have been pretty effective”, Baldwin athletic trainer Gary Stevenus said. “While not always popular, the guidelines are helping keep students, coaches, and fans as safe as possible while still allowing competition.”

”I think it is giving us more opportunities to go to state and compete against schools like Baldwin. It’s a big change but I’m hoping to see the best out of it,” sophomore girls wrestler Audrey Darnell said.

The girls and boys wrestlers will go through 3 qualifying tournaments before qualifying for the state tournament.

Regionals will be the first qualifying tournament for Boys Class 6A and 5A. This will be the second qualifying tournament for girls divisions and the rest of the boys classes. The regionals tournament will be a one day competition for boys and girls. The boys classes will be held on Feb 12, 2021. And girls divisions will be held on Feb 13, 2021. The tournament will be an 8-person bracket for both boys and girls. Top four finishers in each weight class will move on to compete in the sub-state tournament; each qualifier will receive a medal.

This tournament will be a one day competition with 8- person brackets for both boys and girls. These brackets are made up of the Sub-State qualifiers. Top finisher in each weight class will be the state champion for that weight. The top three teams to finish in the state tournament will receive trophies.

The girls wrestlers have claimed the #2 ranking as a team.

“I have had one set goal since the beginning of the year,” freshman girls wrestler Hayleigh Wempe said. “That is to win or place in the top 3 at state, have a great year, and see all of my teammates do amazing.”

The Bulldog basketball players have a new look to their postseason as well. There are a couple more restrictions for the players.

“This year, we start our games differently. Instead of a tip-off, we just throw the ball in,” sophomore girls basketball player Kate Welch said.

Unlike last year, the state tournament will be held at a home site instead of an arena.

Before this season, Sub-State would be set up by record and seeding. But this year, to reduce covid exposure and traveling, nearby teams will compete with other nearby teams. This means that some Sub-States can include more difficult teams, and others may not. Baldwin will be one of those schools to compete in a tougher bracket.

Instead of the usual 8 teams at state, this year there will only be 4 teams there. The first round of state will be held at a home gym rather than an arena.

“I think it’s appropriate, we knew we couldn’t have tournaments with more than four teams, so it’s great that we still get to play and have a postseason,” boys basketball head coach Donnie Blanchat said. “A lot of kids last year got that taken away from them, so anything that we or the state can do to help us continue to play is a good thing, even though it may be uncomfortable for some people.”