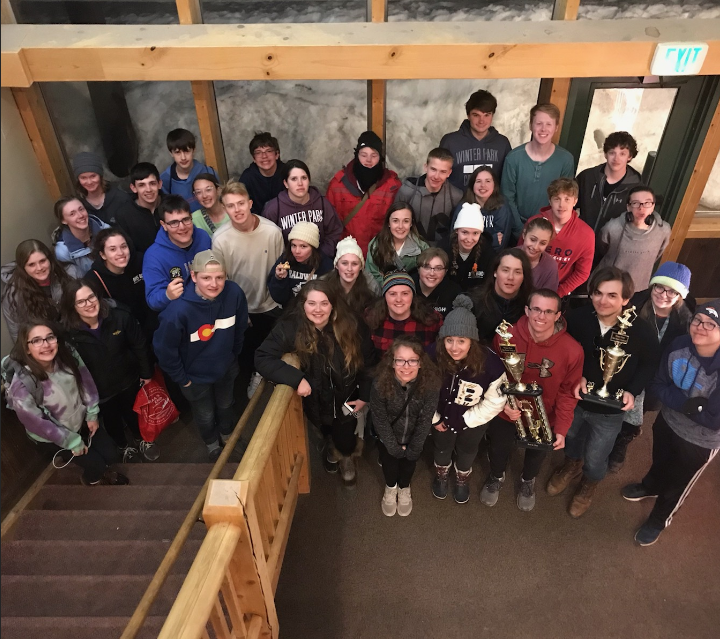 The Baldwin band made a trip up to Fraser, Colorado, recently to ski on the Winter Park Slopes. While there, they performed at the Winter Park Ski & Music Festival and ended up taking home some gold.

On March 26, the students began their long trip across the state. They drove overnight to arrive on March 27 to pick up their ski rentals. Throughout the duration of the trip in their free time,  the students spent time either skiing, snowboarding, or doing the non-skiing activities.

“All the non-ski activities were a lot of fun but I mostly enjoyed the snowshoe tour,” Senior Sydney Thurlow said. “The scenery was beautiful and it was really fun to slide down snow banks and spend some quality time with good friends.”

The band performed in the Ski and Music Festival on Thursday night. They ended up bringing home a trophy for Best in 3A and Superior rating. The contest filed under the class according to Colorado’s standards, so BHS was a 3A school.

“I was very happy and proud that the band earned a 1st division rating,” Director Will Cooper said. “Apparently, it was good enough to earn us our 2nd Best in Class Trophy. I thought our band kids represented our school very well and I was proud to be associated with them.”

There were a lot of different schools from a lot of different places and divisions competing against us. So the competition was a little more challenging to place in. The band had been practicing their competition pieces for months beforehand to perfect their pieces. So winning the awards that they did was a sweet surprise.

“I was sort of surprised because I knew our band could do it but also excited that we did so good,” Freshman Emily Taylor said.