Halloween costumes have gone too far 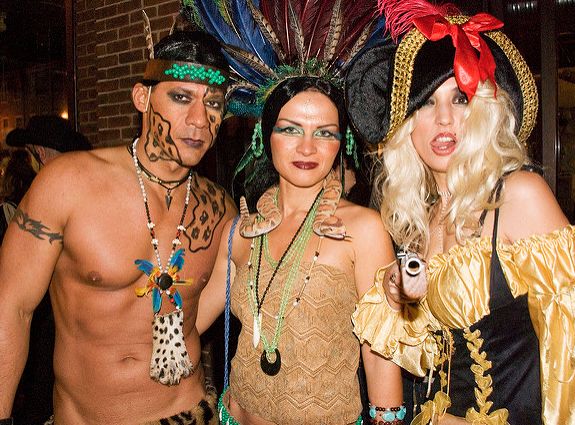 It is finally October, and we all know what that means, it is time to start hunting for the perfect costume to wear this Halloween. At an attempt to commercialize the beloved Fall holiday, stores have steered away from the classic costumes of bloody vampires and rugged werewolves, and has stocked the shelves with costumes that not only are just sick practical jokes, but also offensive to many people. Disrespectfully highlighting the extremes of many stereotypes, these Halloween costumes have caused many people to be offended by turning their life into a joke.

Many of the Halloween costumes that are classified as offensive include costumes that mock the way a society looks, or another culture from around the globe. As listed on the Huffington Post, some of these culturally derogatory costumes include outfits such as “Tequila Bandito,” “Sexy Arab,” and “Little Chinese Boy”. Stereotyping many cultures, Halloween costumes such as the ones listed below have crossed the line between dressing up and paying a tribute to a certain person, and negatively stereotyping a whole group of people or society. However, there are not only culturally offensive costumes, but also racially offensive costumes.

Along the lines of offending one’s race, it is arguable that some people are too sensitive for today’s society, but the case of Halloween costumes, they have become a mocking game about who can mock a type of person better than the other. This is highly prevalent in Latino Themed, or Day of the Dead themed costumes. There is a difference between wearing a Day of the Dead costume respectfully appreciating the Mexican holiday, and causing a sexual perception of the Latin American race. By creating this perception, young Latino women everywhere are now stereotyped and sexualized as a whole.

Desperate for profits, the now commercialized holiday has started ridiculing mental illnesses. Mocking the reality of health issues including obesity, anorexia, and mental health patients have definitely crossed the line. Costumes such as “Anna Rexia,” “Sexy Mental Patient Gown,” and “Fat Ballerina” are rude and offensive to those whose lives they mock. These illnesses are not jokes and are a reality for many in today’s society.

Halloween has become a commercialized holiday, spirited by offending others by dressing up mockingly offending many cultures, races and health patients. A societal line has been crossed between dressing up and celebrating the spooky tradition of trick-or-treating, and insulting others. There is only one way we can solve this problem, you must become aware of how you dress affects the others around you. Instead of reaching for that “Sexy Eskimo” costume hanging on the rack at your local Halloween store this year, try reaching for the witch or warlock, putting an end to discrimination and insulting costumes.